Very happy to be at home at my desk this Sunday morning, catching up on some oddments of admin before going out to bring in the poor houseplants in case the frost arrives. (There's a nasty dark sky gathering out there, despite the sunshine.)
But before ticking off the last items on the list, I have some thanks to shout out about.

As I've been travelling between Wiltshire and Yorkshire, I've added two white horses, one for each county. 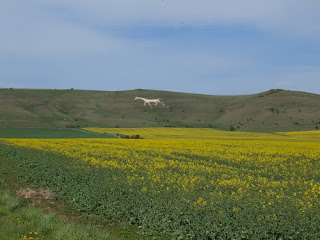 Distant "thank you!" waves to some lovely schools in Wiltshire: to PINEWOOD SCHOOL, Boughton; to ST. MICHAEL'S CofE PRIMARY SCHOOL, Aldbourne and to ST GABRIELS SCHOOL FOR GIRLS, Newbury. Thank you all for being such great audiences and listening to me chatting about my books. Extra special cheers for all the school ibrarians and to the wonderful people of ALDBOURNE CHILDREN'S BOOK GROUP who helped with the whole week, as well as to KAREN HELLEWELL for supplying my books for the book stalls. (I was able to sneak a happy day out to meet up with some writing friends too!) 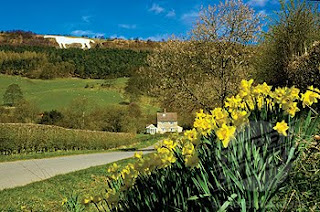 This week was busy too, so author greetings to the Year 3 pupils and staff at EAST ARDSLEY PRIMARY SCHOOL, Leeds where we all had a brilliant STORYTELLING DAY with some African and Australian tales, and also to BRAEBURN JUNIOR SCHOOL, Eastfield, Scarborough - a bit of a dash through all the classes but I hope you all enjoyed the moment!
Posted by Penny Dolan at 02:22 1 comment:

Musing: The Archers - an Everyday Story of Literacy Attack.

Dum de dum de dum de dum . . . Every Sunday morning, my dear mum listened to “The Archers” as she busied herself in the kitchen. Even though my housekeeping is not in any way as timetabled, I often find myself listening to the Archers Omnibus, possibly as a gentle way of hanging on to long gone moments.

I’m not an addict of the Archers and the programme and the characters annoy and amuse me in less than equal measures. Yet as a writer, I love playing the “predict-the-plot” game and musing on what is being set up for future episodes.

However I’m always angered by the script-writer’s apparent anti-book scenes and sniping about readers and reading.. There’s a kind of recurring sub-text that suggests “how stupid is it for anyone to spend time reading” and often adds a bitter note to the programmes

I’d endured boring David & Ruth’s choice of boring books for their children which never seemed to move beyond moaning about having to read a boring Postman Pat book over again. “Get to the mobile library van, fools!” I’d shout, although now we’re all in Austerity Ambridge, that’s no longer a likely scene.

Besides, why do only the most self-obsessed snobs like Jenny & Linda & Jim Lloyd seem to have the reading habit? The rest fret about any hint of reading, and truly worthy characters prefer cooking and baking and growing flowers. Although Usha the good lawyer reads, she is such a token character that it hardly counts.

Reading is hard and mysterious. Someone makes up appalling rhymes that are regarded with awe. The script for any village panto is mocked until the good folk “make it their own” by changing the words to make it easier to read. Computers are machines of wonder, literacy for all. All comedic but – harrumph!

Just at the moment there are three especially annoying Book Threads.

The Village Book Club is one. I’m sure this Club has never chosen a book that people have simply enjoyed. Books mean angst over catering or unsuitable or tactless content. The most recent book of choice was Mistress of the Paddock – a title that tells all. Yes, Book Groups are a pretentious & misguided waste of time for all involved. And a good chance for some anti-book moaning.

Then there are authors and their awful presumption. At the moment, this is exemplified by two dreadful yuppies – Leonie and James – who rish into scenes now and again, loudly setting up photo-images for a book they are writing about the village. So not only are books irrelevant and silly, so is anyone who is involved with books & writing. They are likely to cause an unwelcome stir. More moaning.

Then there was today’s kick-a book example. The broadcast included middle aged but youthful Kenton moving into his boxes into beloved barmaid Jolene’s pub.

So we had the “aghast at too many books” moment followed by the “grumbling about space on the bookshelf” moment. Cheery Kenton’s okay, though. Some of the boxes weren’t books after all! They were comics and magazines after all. Ho ho! Kenton’s a regular guy after all! Grrr!

I’m now waiting for the imminent “Hey, I got me a Kindle!” scene. Can’t be long coming. Oh, Ambridge script-writers, what have you got against reading?
Posted by Penny Dolan at 05:24 No comments: